Rayyane Tabet, an artist based in Beirut and San Francisco, draws on his experience and research to create sculptures that offer an alternative perspective on geopolitical events. Because of his architectural background, he often applies this knowledge when imagining new sculptures. What is the methodology of sublimating sociopolitical events through personal narratives in his work? The following is an excerpt from an online talk given on January 12, 2021.

First, I want to talk to you about this image.

In 2006, when I was a student in architecture in New York, I went to buy a cup of coffee from a coffee shop in Manhattan. While waiting for it, I saw that somebody had left their copy of “The New York Times” behind them. The front page showed a photograph of series of trucks full of rubble, carrying their content to dump it into the water. The rubble had been the result of the most recent war back then, between Lebanon and Israel in July of 2006. And it was a war I had lived through, and I had evacuated in a rush in order to return back to New York. So, at first, I was struck about a place I had just left, that somehow seem to follow me back to where I had evacuated. Secondly, I was struck by the composition of the photograph, all these trucks full of debris going to the water and a billboard on the right side of the image, showing the geological formation. 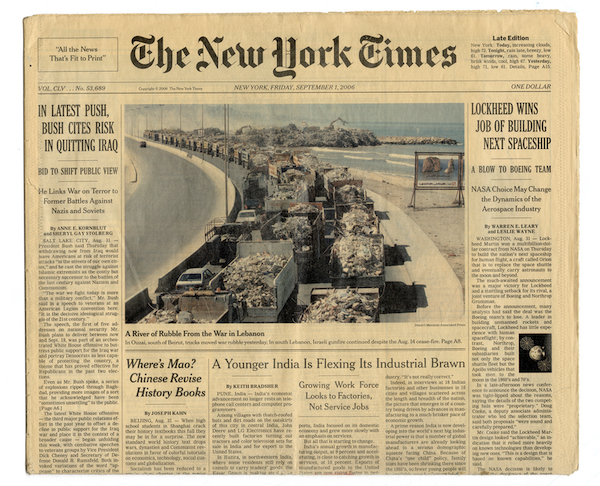 I had always been used to seeing the representation of my country, by way of showing like the perspective of the subjects of people. And so, this was one of the first time that I saw a striking image at the front page of a major newspaper that did not focus on people, but rather focused on objects. So I think―since then, every time I give a talk, I start with this image because I think it’s a very good summary of my way of looking at the world. It is a way of looking at the world that thinks about what happens to objects and things in historical moments and political moments.

So today, I will talk about work called « Five Distant Memories », the suitcase, the room, the toys, the boat, and Maradona. And this series took me 10 years to complete, when I started this exercise, I realized that I actually have five moments that I could consider being my first memory. And each of these memories was connected to a specific object. So, the idea of the series was to try and reimagine or remake these objects, as if they have been transformed or altered by the memories.

The first work is from 2006. And it’s connected to memory that I have of always keeping a packed suitcase at the side of my bed. And the reason why I had to keep a suitcase at the side of my bed is for the possibility of an evacuation, because I grew up in Beirut during the Civil War. So even though this event might sound like it is traumatic for me, the safest object I felt connection to was actually this suitcase.

So, I started for this sculpture, I started asking people around me to give me their old suitcases, and I would fill them with objects needed for an evacuation, and then I would dip them in concrete. So you always have at the center of the sculpture, an actual real object that’s kind of hidden or locked inside of it.

The next memory is, I remember standing in the doorway of my bedroom and my room had disappeared. And again, even though that was a very difficult event in my life, because I was very young, I was six years old, back then―for me, it was very liberating because I always hated my bedroom. And this, for me was a reason to re-make my bedroom the way I wanted.

So, for the sculpture, I cut apart the door and the window of my bedroom, in Beirut. And I use them to support this piece of fabric that is cut to the same dimension as my room. So, you basically have the volume, an exact replica of the volume of this bedroom that is able to be transposed and shown anywhere in the world.

For the third memory, I remember always keeping with me a set of woodblock toys. And I think that this is the―now that I think back, I think that this is the material that got me very interested in architecture and in making sculptures.
I took this set of 28 woodblock toys, and I made concrete copies of it, I made 35,000 copies and composed them into one very large floor sculpture.

And with the sculpture I produced a video―a short video; where I take these pieces, and I make different compositions using them. So even though the video and the sculpture look like an exercise in pure composition, it’s actually based on this very personal memory. And this is why I always like to talk about these early works, because in them is the foundation of the way I think, and I make work today which is always to try and find within an anecdote or a story or event, something that transforms form. 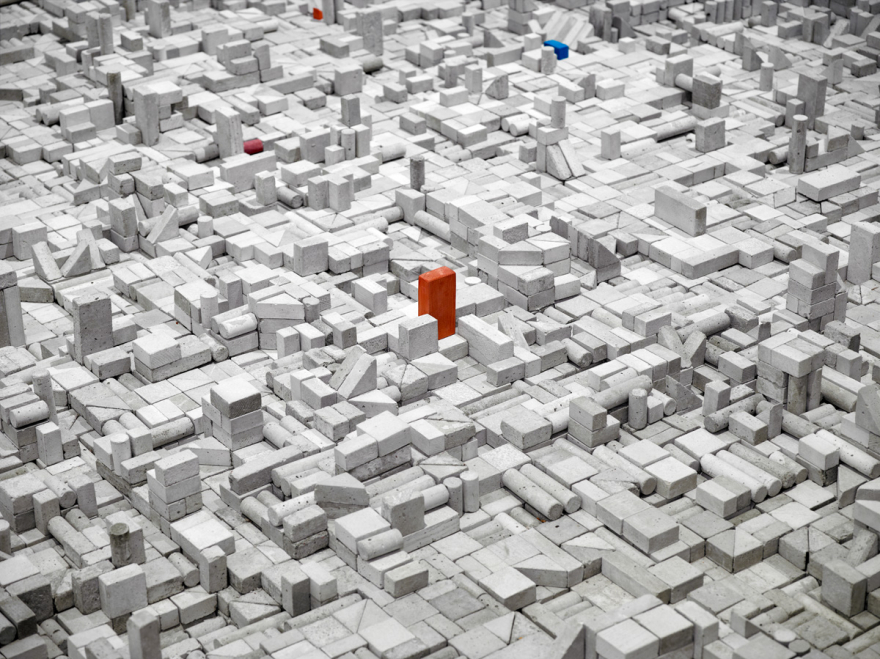 Architecture Lessons (2012), from the series Five Distant Memories: The Suitcase, The Room, The Toys, The Boat and Maradona (2006-2016)
35.000 concrete cast of a woodblock toy set, 27 woodblock toys Variable dimensions

The fourth part of this project is linked to the memory of―I remember being on a boat with my parents. And the event connected with this memory is at one point, my father wanted to escape Lebanon. So, he rented a boat and put my mom, my sister and I in it and tried to row it to Cyprus. And because he was unable to navigate the boat, a few hours afterwards, he gave up and returned back to Lebanon.

And 25 years later, I was able to find that exact boat and buy it from its owner. And the piece was to try and see if I could balance an 850-kilogram boat with the weight of its anchor, which is only 60 kilograms. And the reason being that my father failed to roll the boat because his weight could not move 850 kilos. So, I remembered something I had learned in physics class, that simple pulley every time you add one more pulley, you actually divide the weight by half.

So, I basically made 20 pulleys together so that the weight of the boat would be divided 20 times here, and then it would be balanced by this much lighter anchor.

The last part of this project is connected to memory that I had of hearing on the radio, that Diego Maradona had scored a goal against England. The event connected with this is the very famous goal that Maradona scored with his hand in the quarter final of the World Cup in 1986. And this event is famous also because it was a game between Argentina and England, which were two countries that were at war, during the Falkland Wars in 1984. So, it is always remembered as the revenge of the Argentinians over the British, not in politics, but in sports.

So, the reason why I remember this memory is we always used to keep the radio on in order to hear the news in Beirut. And during that time, whenever there was a bombing, they used to put a siren on the radio to warn people of any danger. The person in charge of this siren was actually a big fan of football and a supporter of Maradona. So, when he saw on the television that Maradona had scored a goal against England, he decided to play the siren and announce it as a big kind of political event in the city.

And this piece is the last piece in the series because for me; it really concluded this investigation about memory and object making.

* After this, Rayyane Tabet introduced two more works, « The Shortest Distance Between Two Points » and researches calls « FRAGMENTS » that he has conducted in Berlin. Due to space reasons, unfortunately, we will not be able to present in this article.

I will end this talk by going back to the first slide that we saw at the beginning. So even though this encounter―with this New York Times happened 15 years ago, it’s still very relevant for me today. And it changed the way I look at the world and set the path for my practice which is always to remember that events happen to objects as much as they happen to people. And that maybe we can write a new history of the world by writing a history of objects.


Rayyane Tabet is an artist who lives and works between Beirut and San Francisco. Drawing from experience and self-directed research, Tabet explores stories that offer an alternative understanding of major socio-political events through individual narratives. Informed by his training in architecture and sculpture, his work investigates paradoxes in the built environment and its history by way of installations that reconstitute the perception of physical and temporal distance. His most recent and upcoming solo shows include the Sharjah Art Foundation, Walker Art Center, Storefront for Art and Architecture, The Metropolitan Museum of Art, Parasol Unit Foundation for Contemporary Art, The Louvre Museum, Carré d’Art in Nîmes, Kunstverein in Hamburg, and Kunstinstituut Melly (former Witte de With Center for Contemporary Art). His work was featured in the 7th Yokohama Triennial, Lahore Biennial 2, Manifesta 12, the 21st Biennale of Sydney, the 15th Istanbul Biennial, the 32nd São Paulo Biennial, the 6th Marrakech Biennale, the 10th & 12th Sharjah Biennial, and the 2nd New Museum Triennial.