In our new series Kyoto Trend Setter, we interview the people behind-the-scenes of cultural activities in Kyoto. Our first guest is Isabelle Olivier from Institut français du Japon – Kansai who promotes cultural exchange activities between Japan and France. She talked about Institut français du Japon, an integration of Institute français, Maison franco-japonaise across Japan and the Cultural Affairs Department (Service Culturel) of the French Embassy, as well as about Nuit Blanche KYOTO 2013, held on Saturday 5th October, 2013.

Editor’s note: This interview was first published in the Japanese section of REALKYOTO last year. Detailed information about Nuit Blanche KYOTO 2014 will be online soon. 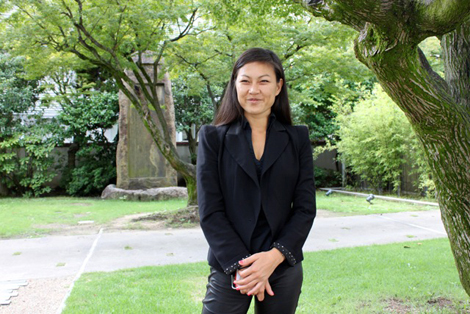 ●Integration of Institut Français du Japon and its activities
– Tell us about your background.
My background is a bit eclectic. I initially worked in the field of international relations, including copyrights. I worked for a law firm in Tokyo and was involved in the activities of UNESCO and EU, as well as in some policy making missions. It is my first time serving in a position like this in the Ministry of Foreign Affairs.
– Did you study International Politics at university, for example?
Yes, exactly.

– What made you change your career path to your current cultural work?
First of all, it’s a very personal reason but I grew up surrounded by artists and I had a huge interest in creation. Secondly, I happened to found HORS PISTES TOKYO, which is the Tokyo edition of the official program of the Pompidou Center. As Executive Director, I discussed and exchanged ideas a lot with the Program Director at the Pompidou Center and I became further interested in culture through the various activities required in launching a festival. It was a decisive moment when I got to meet Japanese artists (Kawai Masayuki, to name one in particular), as their artworks made me want to work with them. I learnt that in order to launch a festival I need, besides legal knowledge, knowledge of production, knowledge of international relations, a cultural and an art point of view and everything in between. This is why I became very interested in this field.

– Institut franco-japonais du Kansai became Institut Français Kansai-Kyoto, and not only the name but also the structure. changed
Since 2013 Institut français du Japon has been established for the purpose of carrying out integrated cultural activities in Japan. We work as a single organization involving Tokyo, Kyoto, Osaka and Kyushu and all across Japan.
We have succeeded in strengthening the networks we already have and we are now able to provide information to artists from different fields in different areas in Japan.
In Kansai, Alliance Française d’Osaka joined Institut français du Japon – Kansai so now we can develop more cultural activities at the scale of Kansai.
– That means you get busier, right?
Yes, exactly.

– It is my understanding that Institut français aims at fostering the diffusion of French culture in Japan and the world, specifically French language education. Is it correct that you are specialized in the cultural mission as being responsible for cultural programs?
Yes, being responsible for cultural programs, I am in charge of the affairs of culture and artists. I am also working on exchanges between Japanese and French artists.
– I myself moved to Kyoto from Tokyo 4 years ago and I found these two cities very different from each other. I am sure that you also feel that way. Generally speaking, French people prefer Kyoto, don’t they?
When I came to Kyoto, I was quite surprised to see the amount of contemporary creation here, not just the traditional culture. I love Tokyo but of course I love Kyoto as well. People consider French people in Kyoto as “not business people but intellectuals”, it is not totally wrong but a bit of a superficial image.
– Do you have any plans of bringing out the unique features of Kyoto?
The most interesting aspect is that we are able to conduct events touring in our network. Additionally, we are planning to organize events that we can bring from Kyoto to Fukuoka and Tokyo. It is our first year so firstly we need to learn about the characteristics of Kyoto, find partners and explore the possibilities of collaboration to pass it on to the next step.
We are, among others, currently considering building a closer partnership with KYOTO EXPERIMENT (Kyoto International Performing Arts Festival).
– What are your thoughts on KYOTOGRAPHIE (KYOTOGRPAHIE International Photography Festival)?
KYOTOGRAPHIE is a wonderful project. As partner, we offer what we can do and transmit the contents to Tokyo and to the world, as it is our mission to contribute and participate in these events as a supporter.

●Nuit Blanche KYOTO 2013 that expands through collaborations
– It has been 1 year since you came to Kyoto. Is Nuit Blanche KYOTO in reality your main priority and also your biggest project so far?
It is of course a challenging project for me but apart from that there are many other big events and projects throughout a year. The Académie de Musique française de Kyoto (a program of music master classes between Japan and France) also forms a large part.
– I think it is a great idea that not only French and Japanese artists but also German artists from Goethe Institute join Nuit Blanche KYOTO. This year British artists also participate.
That’s right – we are Europeans. Basically this project is for Japanese and French artists but we also hope to present artists who are active in Kyoto and Kansai. It is the 50th anniversary of the Élysée Treaty (of Franco-German Friendship) so we focused on German artists. I believe this collaboration has great significance especially because we have two artist residences, Villa Kujoyama (France) and Villa Kamogawa (Germany) in Kyoto city.
– I was amazed that the German Pavilion and French Pavilion swapped buildings at the Venice Biennale this year, due to their historical animosity.
It is as you say, but we can think of it still as a love-hate relationship. Even after the war, we still respected each other in fields such as philosophy and literature. While it is indeed complex, it is a passionate relationship.
– We have neither an American Center nor a British Council in Kyoto at this time, and the Italian Institute of Culture has also been reduced a little. Is there a possibility that you will work with cultural organizations from other countries for Nuit Blanche KYOTO and other events in the future?
We would love to. As I mentioned earlier, we have already put a spotlight on Germany in relation to the 50th anniversary of the Élysée Treaty. I don’t consider Nuit Blanche KYOTO as an event just for Japan and France. In Paris, the cradle of Nuit Blanche, it is conceived as an international event with an international selection of artistic projects. It is already the third time carrying out this event in Kyoto, but, to put it another way, it is also only the third time. Compared to the one in Paris, it is still quite small so there is room to improve it further.
– What is the highlight of the third Nuit Blanche KYOTO this year?
It is hard to pick one but I will briefly summarize some points. On this occasion, German artists from Villa Kamogawa and French artists from Villa Kujoyama are participating. Ulrike Haage (composer / jazz pianist) and Eric Schaefer (composer / percussionist) are both from Germany and artists in residence at Villa Kamogawa in 2012. It is an interesting experiment to have German artists at a French institute.
On the other hand, Alexandre Maubert, a French visual artist in residence at Villa Kujoyama in 2012, showcases his work at @KCUA (Kyoto City University of Arts Gallery). It is significant that he has continued the project he started last year at Villa Kujoyama onto his current artist residency at Tokyo Wonder Site.
Moreover, David Wampach (choreographer / dancer), an artist in residence at Villa Kujoyama in 2011, came back as an artist in residence for KYOTO EXPERIMENT 2013 after taking part in Nuit Blanche KYOTO last year and is going to give a performance at Kyoto Art Center. David is in fact part of a Franco-German team, as he is collaborating with a German artist.
– I have the impression that there is a lot of music, moving image, and performance and not so much visual art like paintings in the program this year.
That is partly because Nuit Blanche is a one-day and all-night event. There are more performances than exhibitions. To make up for it, we specifically asked the galleries to open the exhibitions that they originally had until late at night for viewing.
Also, as an opening event of the exhibition at MORI YU GALLERY, we are planning to have Kawai Masayuki’s performance at Institut français Kansai – as an introduction to his later exhibition. FOIL GALLERY will offer us a place to meet people as an artist salon which is open until 5 a.m. after the regular exhibition.
We are also going to make brochures with a Kyoto city map so we hope you enjoy the exhibitions in the city after Nuit Blanche as well.
It is financially difficult to organize original exhibitions so we are planning to collaborate with others from now on. For example, we asked some galleries to work together in collaboration with Chokyoto (art fair) this year. Also, thanks to our cooperation with KYOTO EXPERIMENT 2013, Takamine Tadasu’s work will be showcased in the plaza in front of Kyoto City Hall. We aspire to broaden our collaboration with others and hope to introduce more figurative art, too.

● France and Kyoto’s reverence for tradition
– Are you planning to set up a theme for your projects at some point?
We have started collaborating with Institut français du Japon – Tokyo and we have more and more projects that tour in Japan. Next year we will be focusing on métier d’art, that is to say, the work of artisans. We would love to introduce it to Nuit Blanche KYOTO. This theme is also being discussed for Villa Kujoyama that is re-opening next year.
– Métier d’art is traditional craft, so to say.
It is the opposite of industrial mass production. It refers to hand work and traditional craft. We are considering this in regards to both Japan and France.
People put a high value on traditional craft both in Kyoto and France so we are thinking of introducing works from both.
– What will happen with Villa Kujoyama in the future?
It will definitely re-open in summer or autumn in 2014.
– The basic mission would be artist-in-residence programs of course, but is there anything else planned?
The fact remains that it is going to be a place for exchanges for people, but we aim at making it more open for Japanese artists, not only for French.
– This is my last question for you. What do you do on your days off?
I don’t have much free time at the moment but if I did I would like to walk in the mountains or explore the city of Kyoto. I am thinking of going to Kurama the next time I can.