Moriyama Mirai’s Re: Incarnation was staged at Kiyomizu-dera on the night of March 11, exactly ten years after the Tohoku earthquake and tsunami. The performance was after the temple had closed for the day, so there were no sightseers around. Guided by Moriyama’s staff, members of the audience made their way around the dark temple precincts to take in the show.

This area is actually a burial ground called Toribeno that has existed here since the Heian era, and like Rendaino and Adashino is known as a place where sky burials were once performed. In the ancient capital of Heian-kyo, nobles were cremated, but the bodies of commoners were usually left out in the open air. 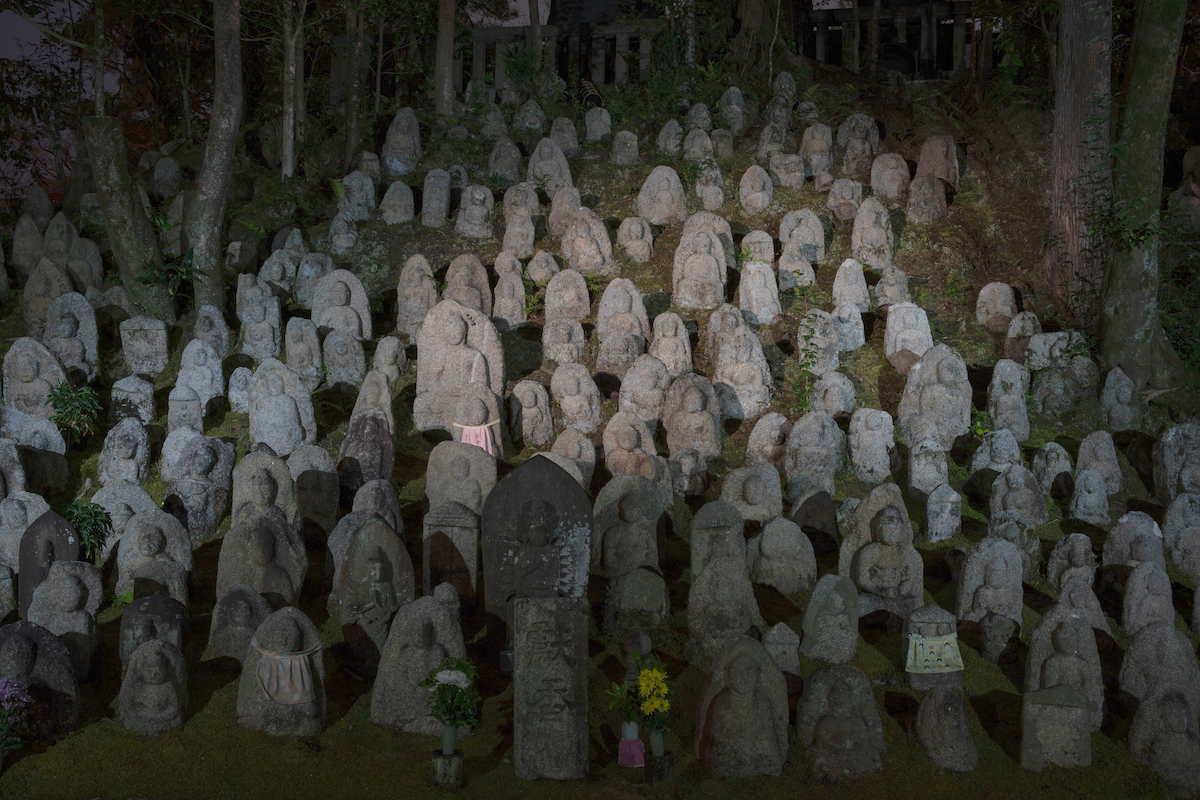 Nearby, in addition to a municipal cemetery, lie the vast grounds of Otani Hombyo. Home to the mausoleum of Shinran, founder of the Jodo Shinshu (True Pure Land) sect of Buddhism, the complex is also the final resting place of many Jodo Shinshu adherents, and during equinoctial weeks is packed with people making the customary visits to the graves of ancestors. At night though, the cemetery is deserted. The only motion on this evening was the occasional warm breeze rippling through the treetops.

This site-specific performance consists of a total of nine scenes. Of these, eight are named after what could be termed sacred sites in the city of Kyoto: Tsukiyomi, Ogura, Momoyama, Hiyoshi, Kiyomizu, Kohyama, Kifune, and Atago. The last location is the “Kiyomizu Stage” in front of the Hondo (Main Hall) of Kiyomizu-dera. Moriyama apparently visited all these sites ahead of the performance, taking photos/video and conducting field recordings.

According to Moriyama’s statement in the leaflet, the number nine was inspired by the Kusozu, a series of nine Buddhist paintings depicting the decay of a corpse left exposed to the elements, the body bloated by decompositional gas, the discoloration and dissolution caused by putrefaction, and the ravages of maggots, birds and beasts all depicted with terrifying realism. The performance was not a direct copy of the Kusozu, but as one might expect in a place endowed with the particular power of a funeral site, there was certainly something out of the ordinary in the air.

● The nine scenes inspired by the Kusozu

Light peeks from the other end of a path up a gentle slope. A drone-like sound is audible. The narration written and read out by Moriyama himself overlays this sound. “Reading fortunes in the stars / the dark side of the moon / From the gap torn / a spring / penetrating and dissolving / with nowhere to go / melts into the earth.”

The first scene took place beside a brook flowing from Higashiyama. A single performer in a costume that could be shroud or surplice, bathed in lighting with a moonlit glow, dance-walks among the trees. The place of kiyomizu, literally “pure water,” is said to have been found by an ascetic seeking water, and it is from this legend that the temple takes its name. It is a superb introduction to the performance, referencing the temple’s origins. Needless to say, water is the source of all life. 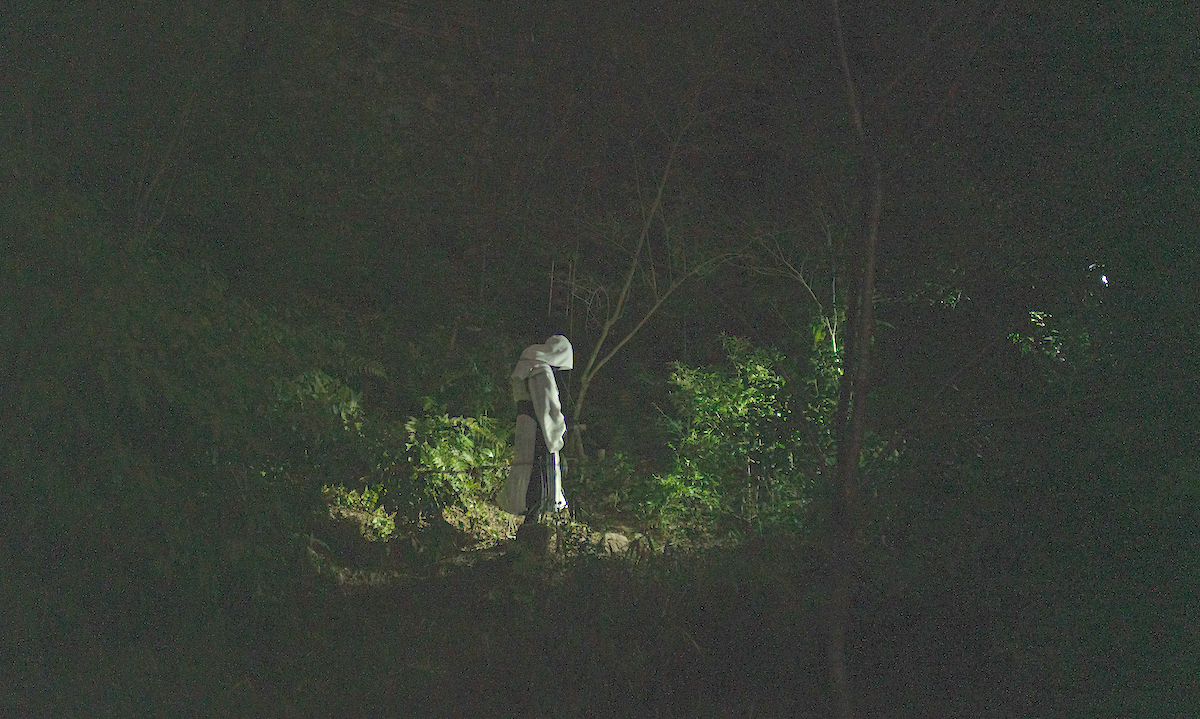 There is only one performer in every scene, their face hidden right to the end. The white costume reminiscent of Samuel Beckett’s Quad is black just in the sash and undergarment. In the second scene, sure enough, when the performer dancing among the trees moves up and down, the body seemed to hang in the air and descend to the ground, thanks to this excellent example of costume design from Hirokawa Tamae that is simple, yet provides just the right amount of function. 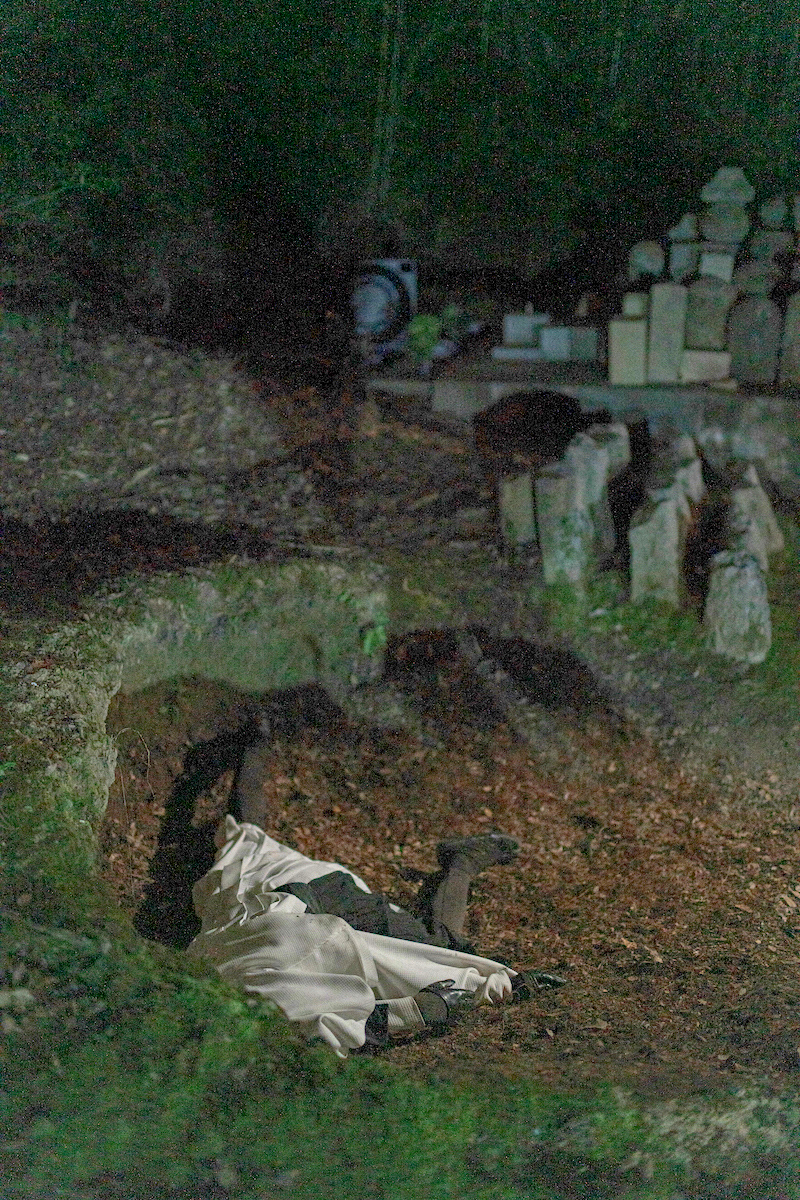 At the third location, the performer rolled around on flat ground, in a wriggling, writhing dance. Close to here are decaying gravestones, and stone statues that appear to be human figures or rakan (arhats). A person’s return to the earth that conjured up visions of Beckett’s The Lost Ones, but in hindsight, also foreshadowed the conclusion in scene nine.

The fourth scene was performed behind the Okuno-in hall built over the sacred Otowa no taki (Otowa Waterfall). On the cliff from which the water gushes sits a small statue of the Kannon, next to which the performer sat as if praying. This too is doubtless a show of respect to water. 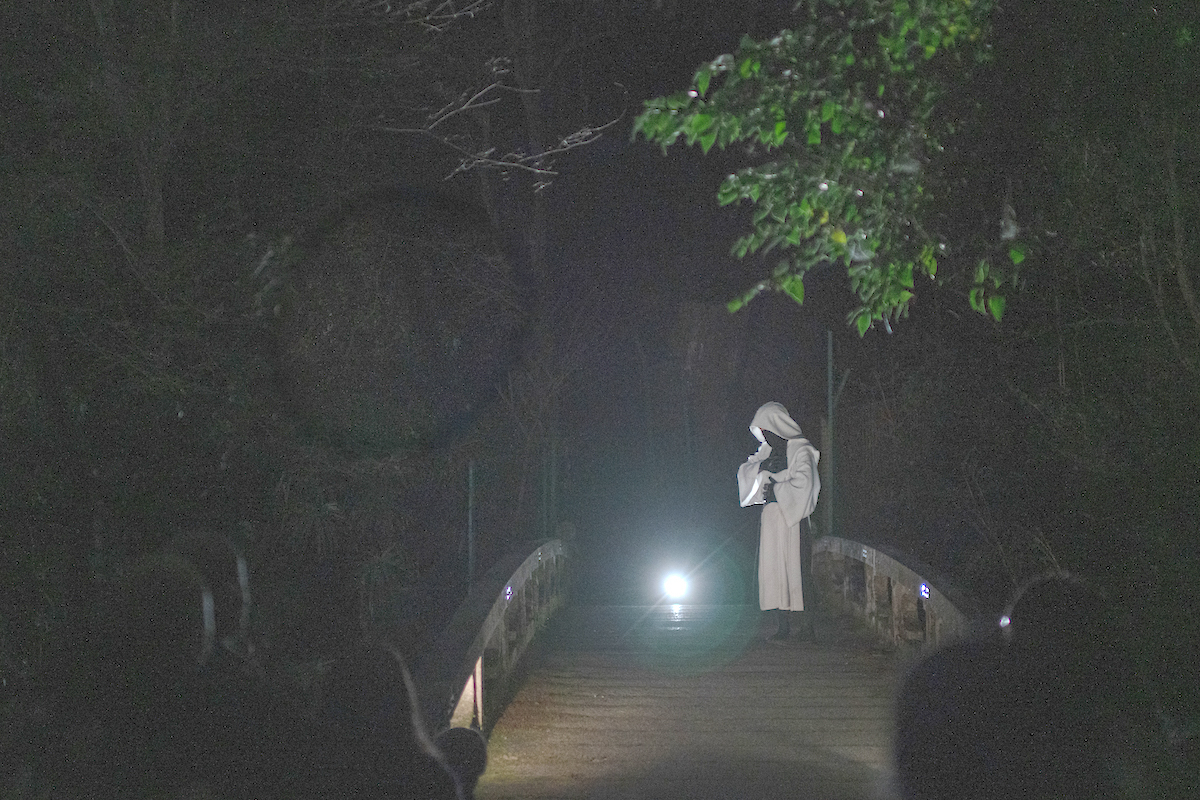 The fifth scene was on Joju Bridge; a link to Mugen noh.

Scene six was in the garden of Jojuin, known as the Moon Garden. The performance takes place by the shinji-ike pond in the shape of the character for “heart,” with the audience looking on from a tatami area some distance away, in the manner of moon-viewing. Incredibly, the strangely shaped rocks in the garden are a perfect match for human height, and somewhat human in form as well. Both rocks and human begin to resemble the dead.

The seventh scene took place at the Sentai Sekibutsu Gun, a group of 1000 stone statues transported here during the haibutsu kishaku movement to destroy Buddhism. It was, so to speak, a refuge for Buddhist figures from wholesale massacre. The group includes various incarnations of the Buddha, including bosatsu (boddhisatvas) and nyorai (tathgata) figures, but the most numerous are jizo, bringing to mind dead fetuses or babies. The performer emerges, zombie-like, then proceeds to prance about in demonic fashion among the stone statues. 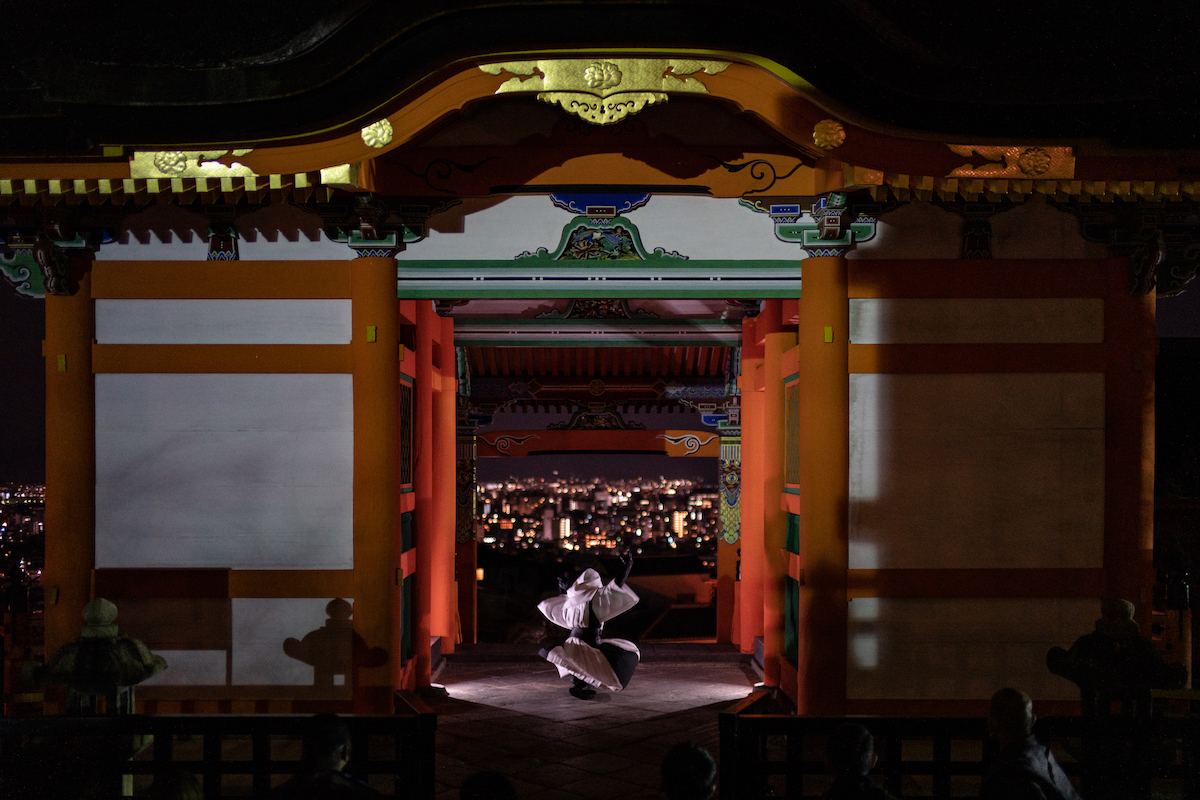 In the eighth scene, the zombie, or rather, the performer, danced frantically at the Sai-mon (West gate) of Kiyomizu-dera. The face remains concealed, but from the body shape and bearing, we can tell it is Moriyama. Beyond the vermillion pillars and white walls of the gate, with night now closed in completely, the Kyoto streets serve as a distant “borrowed landscape.” In the Jokyo Gekijo (Situation Theatre, a.k.a. Aka Tento, or Red Tent) of Kara Juro, and Terayama Shuji’s film Denen ni shisu (“Pastoral: To Die in the Country” a.k.a. “Pastoral Hide and Seek”) the edge of the red tent was furled up, or the walls of the set knocked over, to reveal the Shinjuku streets behind. Here too, there was a distancing effect of forcing the audience back to reality. 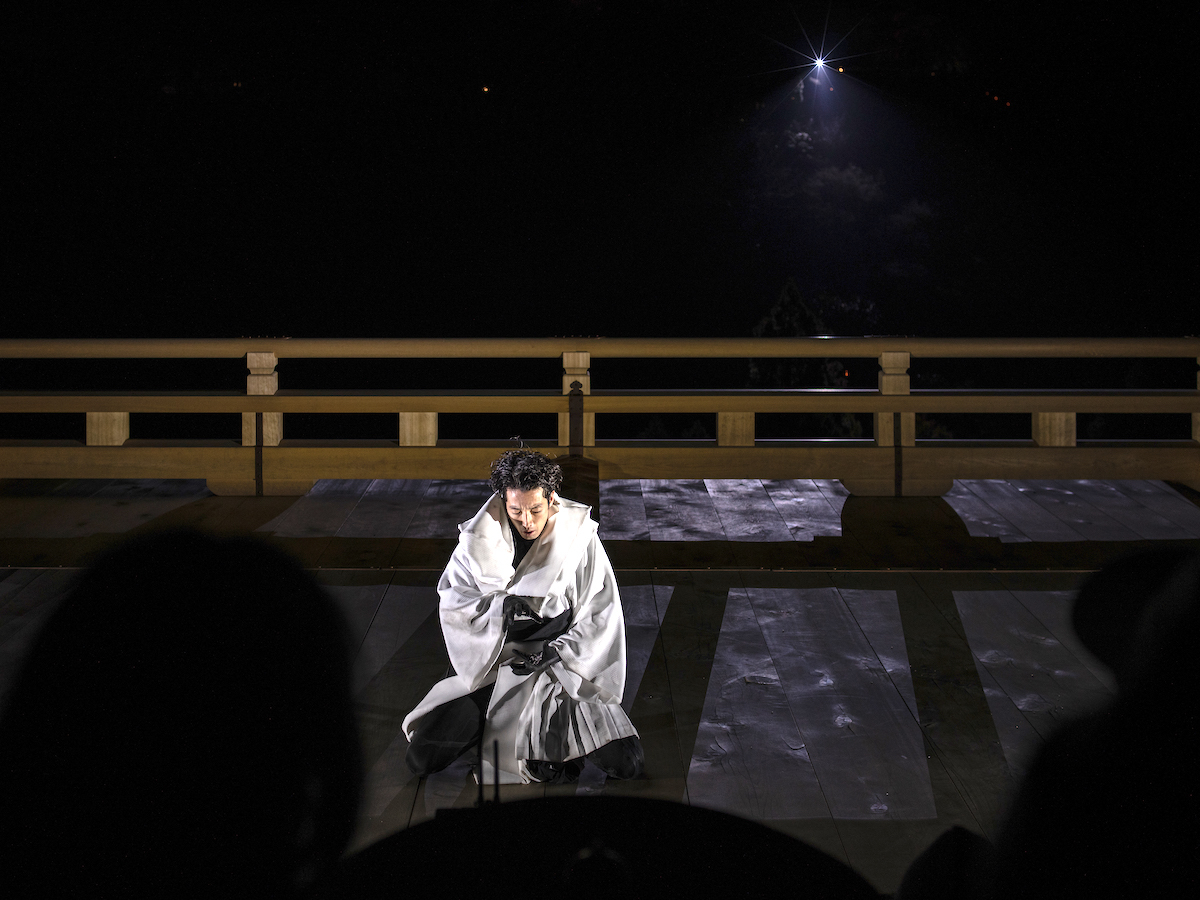 Still buzzing with excitement, performer and audience moved to the final scene. Moriyama, face now revealed, moves, dances, leaps freely about using every inch of the “Kiyomizu Stage.” Intense, symmetry-shattering body movements; expressions of respect for the temple, the location, the world. To finish, Moriyama sheds his white costume, and squats down. When he arises, his entire body is covered in fluorescent green paint, in a dramatic expression of birth – life – death – rebirth.

● Catharsis felt at the end of the performance

Yes Re: Incarnation did end on a cathartic note, but the performance was not without its issues. For instance, the music/sound (Tateishi Jukan) did not seem to complement the work. Nothing to do with whether the music itself was any good: more a matter of, with this content and that environment, perhaps it would have been more effective to base the music on sounds from nature, and keep volume and echo to a minimum. Moriyama’s narration would also have been more affecting, I think, in hushed tones. Though difficult to set up and operate, it might have been good to have the audience wearing earphones. In this regard, it was the fourth scene, with its emphasis on silence, that impressed.

The Sai-mon should not have been used in scene eight to begin with, because with the red-lacquered pillars, what had until then been a medieval, noh-type ambience, suddenly morphed into something more early-modern and kabuki-like. The effect designed to bring the audience back to the present was good, but Moriyama should have used a different location.

Despite these minor niggles, on the whole the production could be described as successful. Word has it steps are underway to make it into a film by Sekine Kosai, although one imagines it would be difficult to repeat the performance in the same place. Apparently it will include footage of the “sacred sites” Moriyama researched for this performance, so should definitely be worth a look.

Thanks perhaps to the warming influence of climate change, on this day Kyoto was relatively balmy. The cherry blossoms were on the cusp of opening, and the mountains enveloped in the scents exuded by wild animals in this season for love. All living things must die. But the cycle of life continues. In accordance with the connotations of rebirth and transmigration in its title, this was a performance with a satisfying aftertaste.


*Correction (April 28):
In this article first appeared on April 26, I wrote “there appeared to be black objects perhaps symbolizing corpses or coffins scattered about the place, but it was too dark to see them properly.” in the first paragraph after the subhead “Catharsis felt at the end of the performance”. But Moriyama Mirai texted me yesterday saying, “We had taken away all the objects supposed to be installed there just before the performance started (due to various reasons).” Some objects were seen in the photos I received from the organizers, however the shooting of these objects seemed to be done before the performance. Therefore I removed the above sentence. I appreciate Mr. Moriyama for pointing that out.

※Re: Incarnation was performed on March 11, 2021 in Otowa-san Kiyomizu-dera, Kyoto.