REALKYOTO FORUMREVIEWS & ARTICLES
Kaneuji Teppei (b. 1978), whose collaborations with other artists, especially Okada Toshiki of chelfitsch, have stood out in recent years, held his first solo exhibition in Japan for quite some time. And like the Isoya Hirofumi (also born in 1978!) exhibition I reviewed last time, the essence of “Teppei Kaneuji: S.F. (Something Falling/Floating)” is collage. 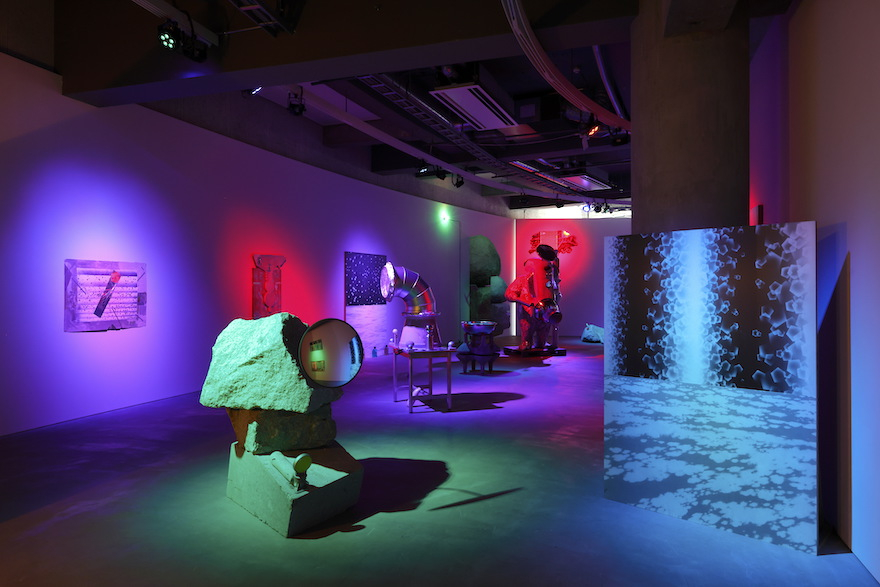 With respect to the exhibition title, let us first summon as a point of reference Kaneuji’s 2010 solo show at ShugoArts, “Post-Something.” The word “something,” which also appeared in the titles of subsequent solo shows by Kaneuji, refers to “readymades.”1 “The choice of readymades is always based on visual indifference and, at the same time, on the total absence of good or bad taste.”2 Having no meaning, interest or value whatsoever in society, “something” (i.e. readymades) occupies the position of free and pure artworks as objects in society’s zones of emptiness (gaps, margins, blind spots). In terms of the modern dualism of “the social system vs everything outside it,” “something” has no place within the system, rendering it is a passage to the outside. 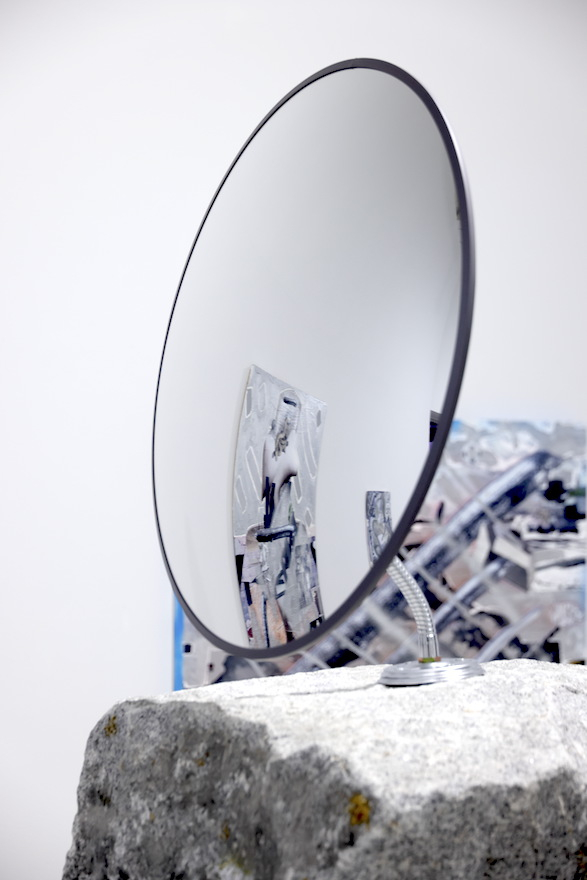 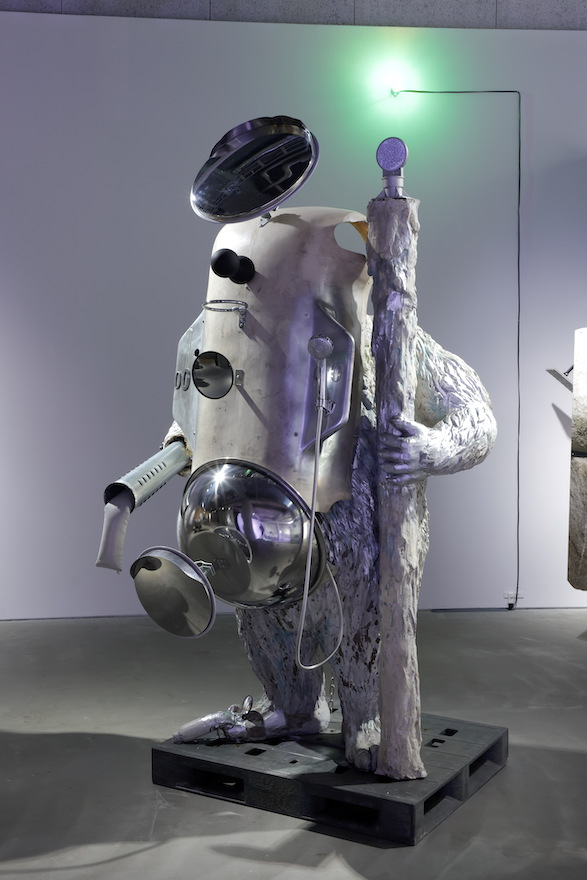 In light of this, we can say that the aim of “post-something” art is not to step outside the system; rather, it is art that goes beyond this dualism with hardly a backwards glance. And the method that enables one to achieve this is collage. Collage involves 1) revealing the elements that form the basis of an artwork by adding extraneous material, 2) traversing the two-dimensional and three-dimensional, and 3) creating frames of meaning. It makes us aware of previously invisible layers; thus it awakens us to the “outside” of painting. However, because it is a process of building up new layers by further adding extraneous material to existing layers, it is also a denial of the “outside.” It is an operation that involves bringing to our consciousness elements that form the basis of existing things, such as margins, zero, white, the transparent, the everyday, and denying/renewing them. Collage was an exercise in supplementation (Derrida), or the repeated deconstruction of the base. Until the early 2010s, Kaneuji’s practice consisted of a diverse, stable variation of such collages. However, a 2016 making-of-style video work showing him cutting out and collaging items from manga and coloring books from the Showa period (1926-1989), suggested he had reached a kind of limit. Even when removed from the original frames, these items still gave a sense of their flatness, or layeredness, as manga projected onto planes. Kaneuji’s discovery was the strangeness that simply by superimposing manga objects he could produce collages of layers, and that regardless of their variety the objects he combined always went well together. These manga-object collages that worked no matter what render nonsensical the very act of collage. And yet, these nonsense collages – whereby anything goes nullifies artistic practice – are interesting precisely because the video is continually changing, and seemed to lose their vitality when fixed as three-dimensional objects. 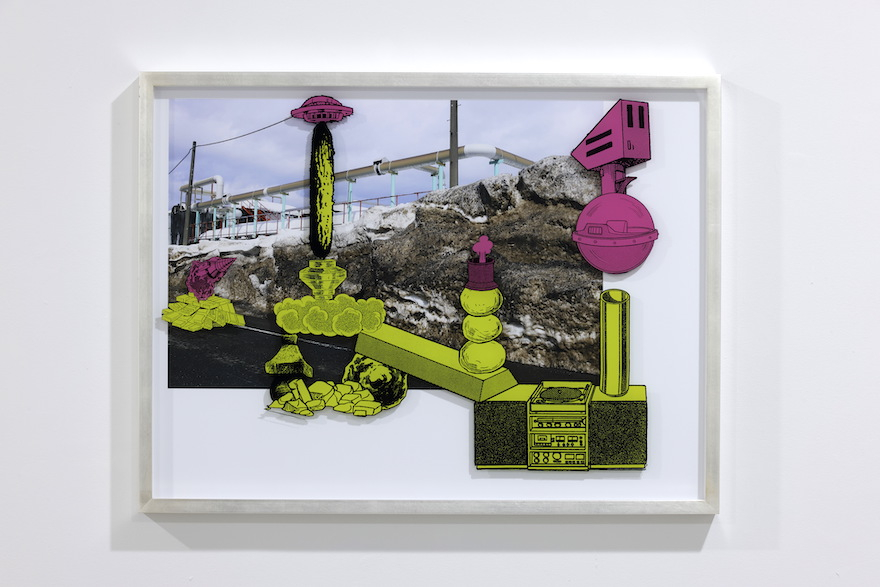 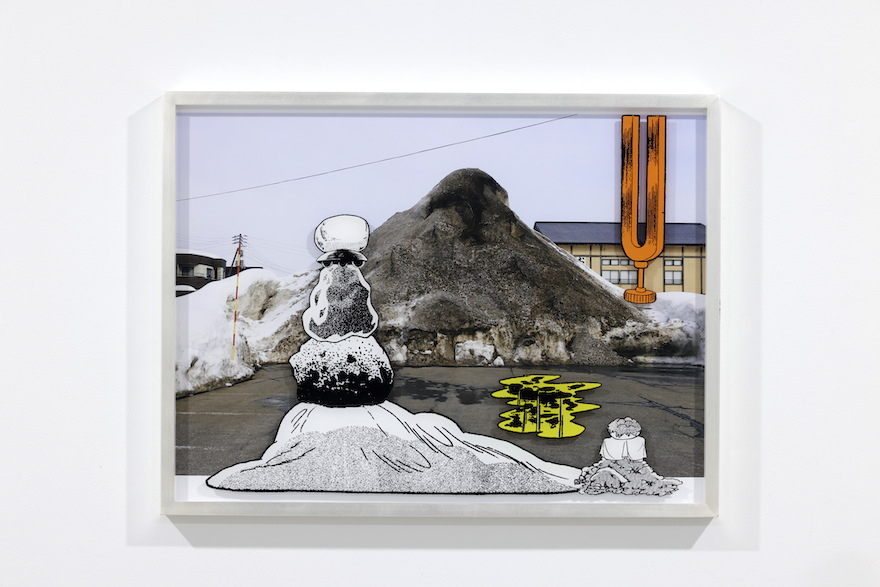 Given that he wanted to give vitality to fixed, three-dimensional works in situations that were continually changing, it was natural that Kaneuji approached the world of the theatrical arts. Over the next six years, Kaneuji’s art transitioned from “post-something” – the deconstruction of the idea of reduction to a base – to “something falling/floating.” But what does it mean for “something,” formerly a passage to the outside, to “fall/float”? 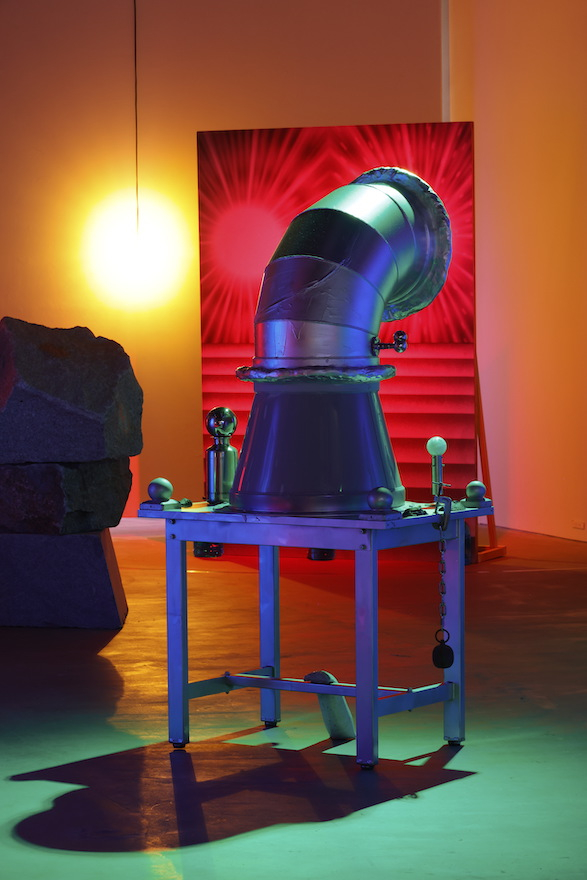 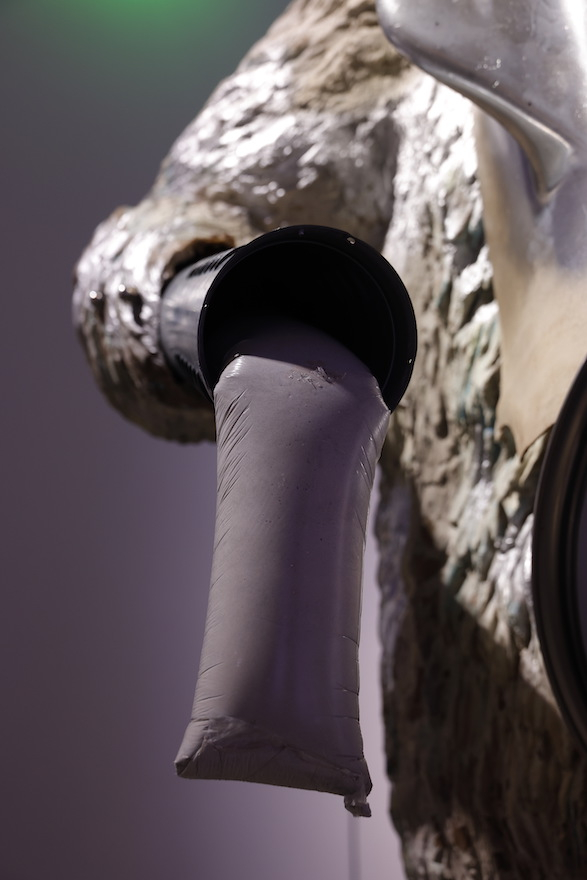 In a nutshell, this transition was from revelation to continuity. Moving from inside the system to the outside (a place of neutrality, or a zone of emptiness of meaning) and continually renewing (denying) is no longer a problem. In fact, the outside consists of countless tiny holes (or pits) that reside (or float everywhere) in the system. Various opposing items are connected by way of their permeation into these tiny holes. In the works in this exhibition, “white” (snow, the color white) and “holes” (perforations, mirrors as holes in landscapes, tubes passing through holes) rendered multiple different things (placed on different pedestals) continuous (water passes through them, they are under the same light) or divided the same things (natural stones and white models of them). 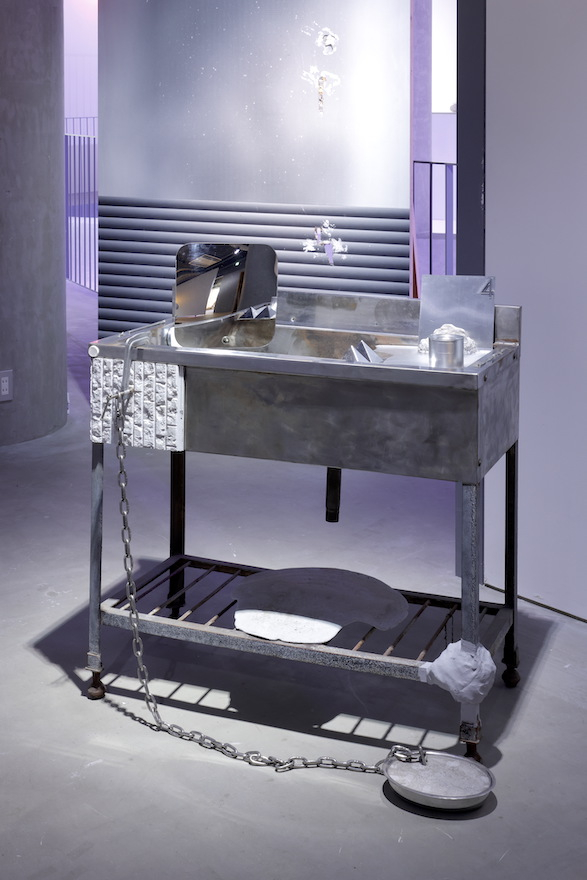 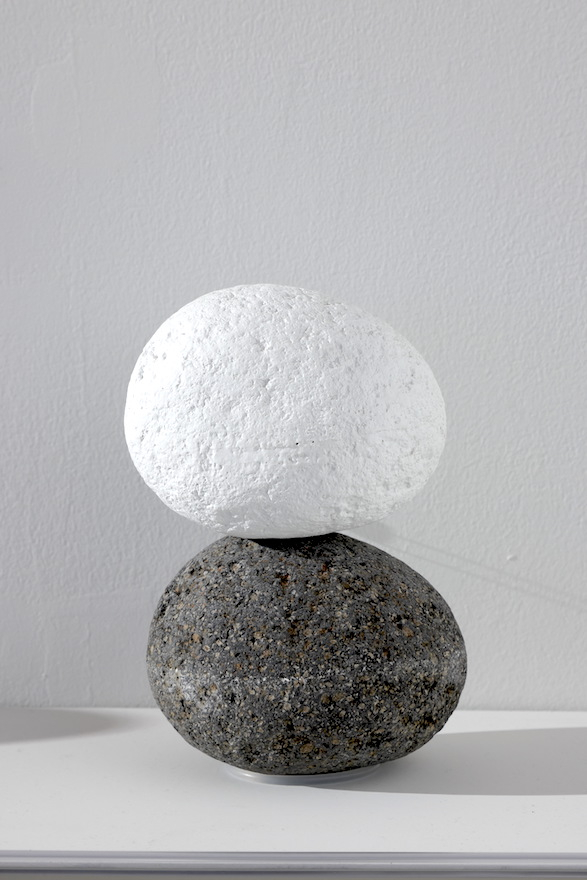 Minimalist primary/unitary forms are pure sculptural works each of which is a single whole with no parts, existing like the number 1 or prime numbers that can only be divided by themselves. In contrast to this, with Kaneuji’s sculptures, none of the works are allowed to be “coprime integers.” If one is “7” and the other is “11,” Kaneuji creates the “something” of “7/11,” bringing both into agreement. “Something” is like a virus that renders mutually nonagreeing things continuous without them merging. The “outside” is not a place one departs to, but something that is temporarily contracted like a disease.

Even having understood the above, this exhibition was monotonous underneath its disorderly exterior and the type of exhibition where if one looks at one piece one understands them all. Of course, this “disorderliness” was a style chosen intentionally by the artist, but everything was poured into this powerful disarray.
The element that Kaneuji’s collages was awash with but was almost completely absent from Isoya’s is “Japan.” The monotony of this exhibition derives from the weakness of the nonagreement of the elements A and B that are connected. For this reason, even if they are connected by micro holes, instead of losing their uniformity and metamorphosing into separate things, the two elements land on the vague chimera of A+B as if according to some preestablished harmony (that almost all the objects are “standing” is also an indication of this). Perhaps the cause of this chimerization is the homogeneous environment that is “Japan.” The “outside” is indwelling, and we sometimes contract it. The local is global. In fact, at the level of art fairs and galleries, one could say that Kaneuji Teppei is already an international artist. But in order to destroy monotonous preestablished harmonies, perhaps the old-fashioned method of physically leaving Japan for a lengthy period is effective after all.
——————————–