REALKYOTO FORUMREVIEWS & ARTICLES
Tsujimura Shiro, whose tea bowls are used in Zen temple tea ceremonies and kohiki tea cups are often seen at famous restaurants, is certainly a popular artist. But there has always been something about Tsujimura’s ceramics that I cannot willingly accept. Because every tea bowl and vessel is so well made it is guaranteed to strike the fancy of ceramic lovers, as someone who cannot get excited by them, I suspect my own insensitivity is to blame. After thinking about the reasons for this, I came to the following conclusion. 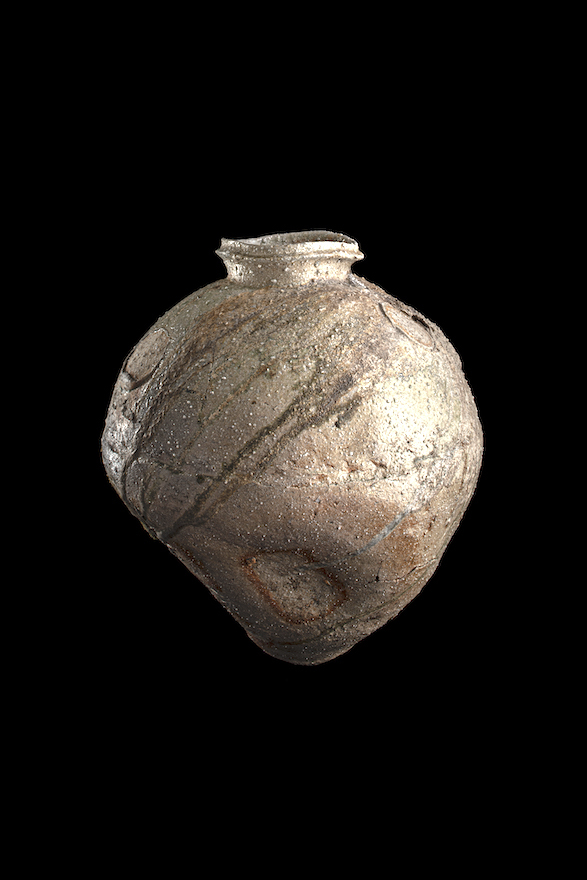 If things conform too closely to the “image” one has of them, they actually appear ridiculous. At the same time, it is the way of the world that things “exactly as imagined” are better received.1 This is probably because when something is exactly as imagined it feels “natural.” The comments by Tsujimura one reads in collections of his works and exhibition catalogs and the DIY lifestyle he lives deep in the hills of Nara (though he uses an electric kiln, which means he has electricity) also contribute to this. All in all, the artist conforms too closely to the image of a “nature-boy ceramicist,” and his ceramics conform too closely to the image of Momoyama pottery (1570s–1640s) favored by ceramic enthusiasts, making him the perfect subject for documentaries. Therein lies the source of my distrust. 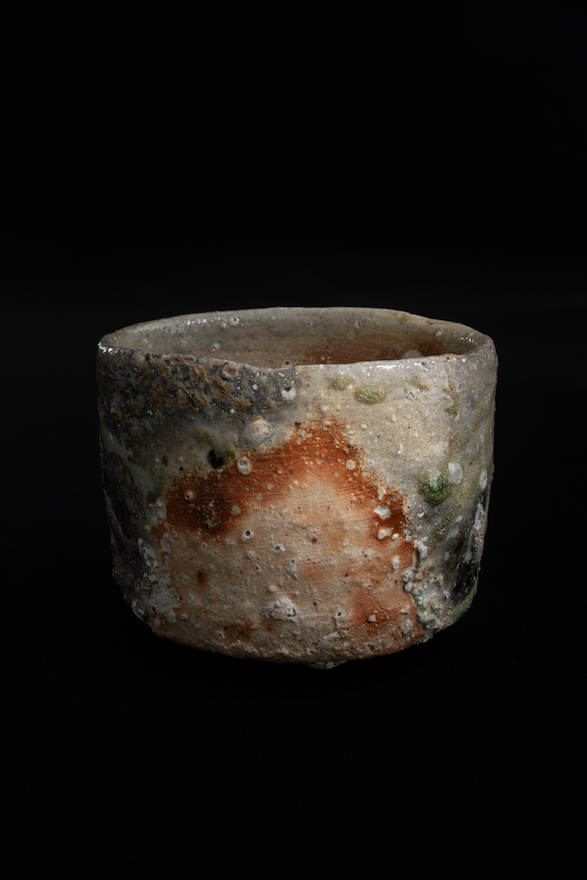 Curious as to how people have discussed Tsujimura Shiro to date, I did some research, but despite his popularity I was unable to find any respectable commentary about him. Then I came across Degawa Tetsuro’s discussion of Tsujimura in a book published to coincide with the artist’s three recent solo exhibitions.2 Excluding replication and reconstruction (the making of copies of specific antique ceramic works), ceramics produced on the basis of confronting antique pottery or porcelain fall into two categories: fundamentalism and utsushi. The former denotes ceramics that reproduce the fundamentals of antique pottery or porcelain. It involves achieving time travel, as it were, and creating new antique pottery or porcelain (!) in the place of bygone ceramicists by reproducing the same clay (soil distributions remain unchanged for hundreds of years) and firing techniques (the physical phenomena inside kilns are the same now as they were in the past) as in the past based on the latest archaeological and geological research. Given that they are made using an electric kiln, from the outset Tsujimura’s ceramics are not fundamentalism.
The second category, utsushi (emulation), denotes ceramics that approach as close as possible items that have been treasured over the centuries and are regarded as ideal forms relying on the ingenuity of individual ceramicists. “They are neither simply replicas of Momoyama tea bowls nor originals inspired by Momoyama tea bowls. . . . Tsujimura Shiro interacts with outstanding works from the past and tries to create those works through his own efforts.” (p. 140) In other words, Tsujimura’s ceramics are above all utsushi. 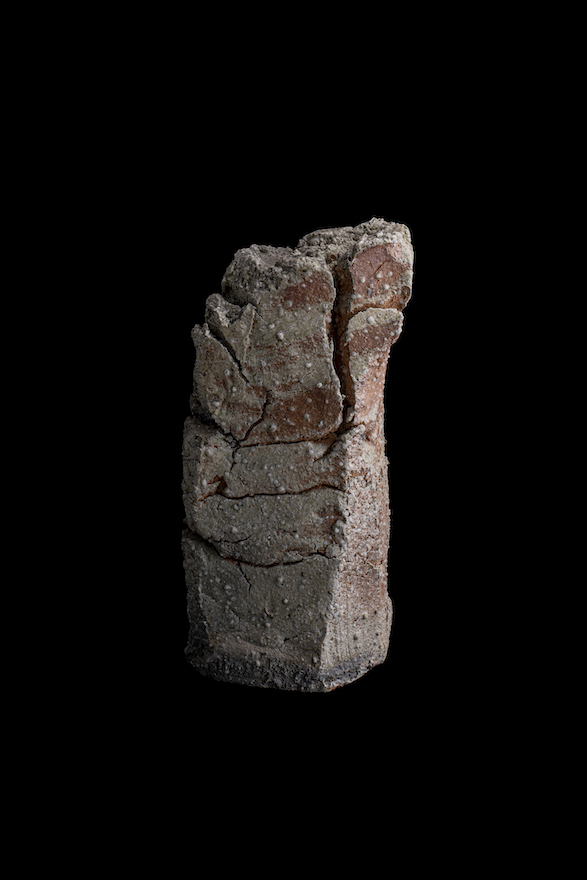 Because utsushi involves “closing in on the essence of Momoyama pottery and creating one’s own work” (p. 136), what one regards as this “essence” is the key point. For example, based on Amino Yoshihiko’s discussion of “mountain people and seafarers” and “itinerant craftspeople,”3 Kato Tokuro, a central figure in the revival of Momoyama pottery, traced the essence of Shino ware to the strong freedom of “society against the state (Pierre Clastres).”4 Artist Nakamura Kohei, whose own practice is centered on a creative critique of utsushi, once compared it to the impersonations by the Japanese entertainer Korokke. “My ‘utsushi,’ which are impersonations rich in expression made by absorbing the characteristics of the original maker and presenting them arranged in my own fashion, are something that would not be out of place in Korokke’s repertoire.” (“Utsushi to Korokke” [Emulation and Korokke], 2001). And true to his word, Nakamura has produced one boldly arranged oido tea bowl after another. Just as Korokke’s impersonation of Itsuki Hiroshi goes as far as presenting him as a robot, creative utsushi does not rely on appearance and image, but involves the absorption of characteristics and the discovery of essence. 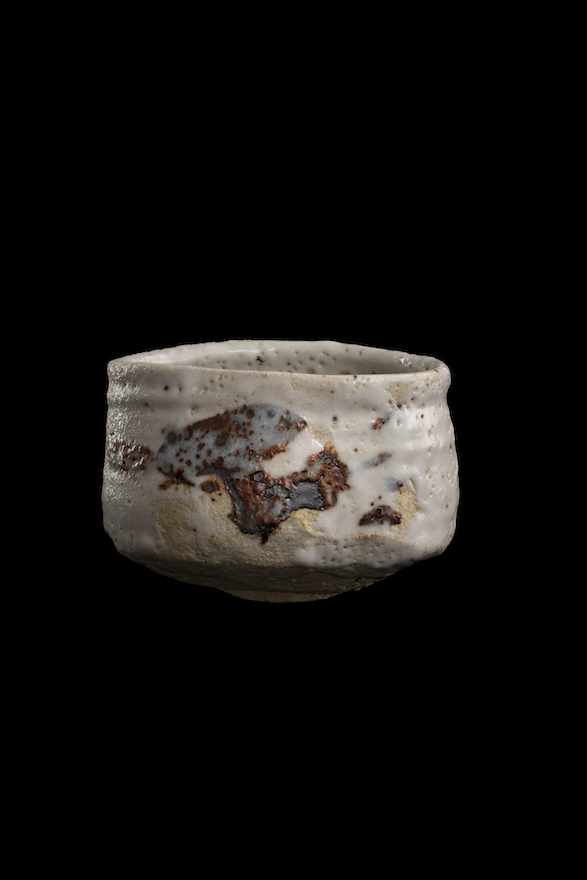 “Looking at Tsujimura Shiro’s Shino tea bowls . . . they strike me as extremely natural.” (p. 139) In other words, the artist detects the “naturalness” in the “essence” of Shino and ido wares and emulates it. This is regarded as a vast nature (3) embracing the very conflict between artlessness (1) and artificiality (2). “The great tenderness and compassion [3] able to be expressed by that oido tea bowl, something that is tranquil even while embracing good [1] and evil [2].”5 But this is none other than a blend of mingei theory (the beauty of a 3rd thing that transcends the conflict between 1 and 2 is akin to Yanagi Soetsu’s “beauty of naturalness unhampered by dualisms (the beauty of odd numbers).”6 Moreover, because the beauty of odd numbers that cannot be expressed in words is ultimately undefinable, “naturalness” as an essence is devoid of contents and can be substituted with anything. In addition, Tsujimura emulates this “nature” he has invoked from mingei as “exactly-as-imagined naturalness.” And he fills the void of the contents with the lifestyle and words of the “ceramicists” that mingei practitioners held up as their ideal.7 “Everything stems from my own attitude to life. Working in the fields, building my own house, making ceramics.”8 It is perhaps to be expected that the commentary on Tsujimura always ends up being an homage that goes round in circles. “I think it was the same in Rikyu’s time. They gathered together old materials or whatever else was available and made things themselves.”9 Tsujimura’s ceramics involve gathering together images of long ago (“old materials or whatever else was available”) and acting Momoyama pottery. For his admirers, this exactly-as-imagined acting is natural and perfectly fine.
——————————–

1 Pianist Sorita Kyohei entered a Chopin competition with his long hair gathered at the back to accentuate his image as a Japanese samurai (?) and won a prize.
2 All quotes hereafter with page numbers are from Degawa Tetsuro, “Tsujimura Shiro ron: kokō no tōgeika no sakutō shisō” [Commentary on Tsujimura Shiro: The thinking behind pottery-making by a solitary, aloof potter], in Shiro Tsujimura (Kyoto: imura art+books, 2022). Though titled a “commentary,” it is actually an homage.
3 See Amino Yoshihiko, Muen/kugai/raku (zōho) [Unrelated/public/free] (revised edition)] (Tokyo: Heibonsha Library, 1996); or, Akutō to kaizoku [Rogues and pirates] (Tokyo: Hosei University Press, 1995).
4“While on the one hand their [Seto ceramicists’] collective behavior resembled that of wandering samurai, on the other it resembled that of a group of roving noblemen. It also resembled that of a group of mountain nomads hidden in the mountains.” “Concealed within Shino-style tea bowls is a bold strength that is very likely to overwhelm people.” From Kato Tokuro, “Shinoyaki zuisō” [Thoughts on Shino ware], in Katō Tōkurō Shino (Futabasha Super Mook Tōjirō special edition, 2007), 67. One could also say that the wild kiseto ware from Tokuro’s twilight years is a good example of creative “utsushi.”
5 Tsujimura Shiro, “Utsuwa to kokoro” [Vessel and mind], in Shiro Tsujimura, 68.
6 The revival of Momoyama pottery and the mingei movement were two important components of the modernism of Japanese ceramics that flourished around the same time. Partly because the latter was also related to the Joseon dynasty boom, it is not unusual for Momoyama pottery, including Ko-Karatsu ware, to be discussed alongside mingei aesthetics.
7 If the pursuit of the beauty of perfection as seen in Chinese ceramics is artificiality, then in opposition to this, the pursuit of the deformed (playful) beauty of imperfection that placed miscellaneous Korean vessels in the highest position among tea bowls (a true case of the low supplanting the high-and-mighty) is also probably artificiality. To begin with, Momoyama pottery was circulated as the highest quality ware available at the time, and even considering that deformation and playful decoration was influenced by Korean ceramics, there is no room for “nature” to be emulated.
8 Shiro Tsujimura, 157.
9 Shiro Tsujimura, 97.