REALKYOTO FORUMREVIEWS & ARTICLES
“Like a mechanical haunted house…” The first comment to pop out of my mouth on leaving the dimly-lit theater after this show may not seem like praise, but actually for me, it was big thumbs-up. My first-hand experience of this work, inspired by David Tudor’s classic of American experimental music Rainforest (1968– ), and also likely influenced by field recordings and the “Acousmonium” format for presenting electroacoustic music using a multichannel speaker system, was like listening to a symphony studded with a range of “acoustic events” jousting over multiple layers. “Acoustic event” here includes countless “sound sources,” that is, replayed recordings, obviously, but also electronic synthesized sound, experimental musical instruments (devices I guess we could call “sound apparatus”) made using exciters and such, the digitally-controlled automatic playing of such apparatus, and, almost unnoticed, human live performance, and the fact that these surrounded, and resounded among, an audience lifted onto the stage at the Kyoto Art Theater Shunjuza. The lighting, synchronized perfectly with the sound, highlighted in turn each individual piece of apparatus on the stage, as if revealing those sound sources in the manner of demystifying a magic trick, but even so, the precise source of most of the sound did remain a mystery. That sounds were not linked to any specific source or meaning suggests the idea was to create the kind of “acousmatic situation” proposed by musique concrète pioneer Pierre Schaeffer. The reality was that despite these diverse pieces of “sound apparatus” emitting their own distinctive sounds, they did harmonize within their relationships with each other, while retaining a certain degree of abstraction, evoking for me, as noted, the idea of a “symphony.” 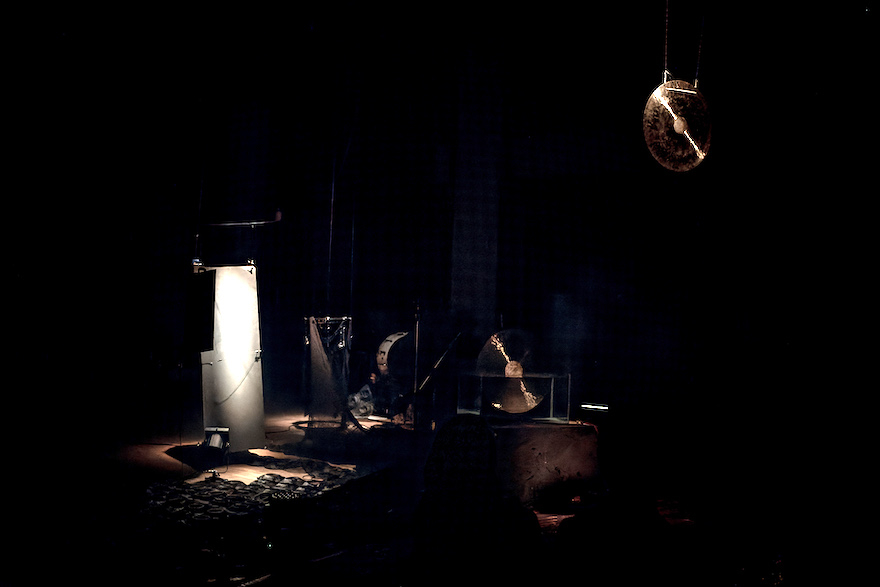 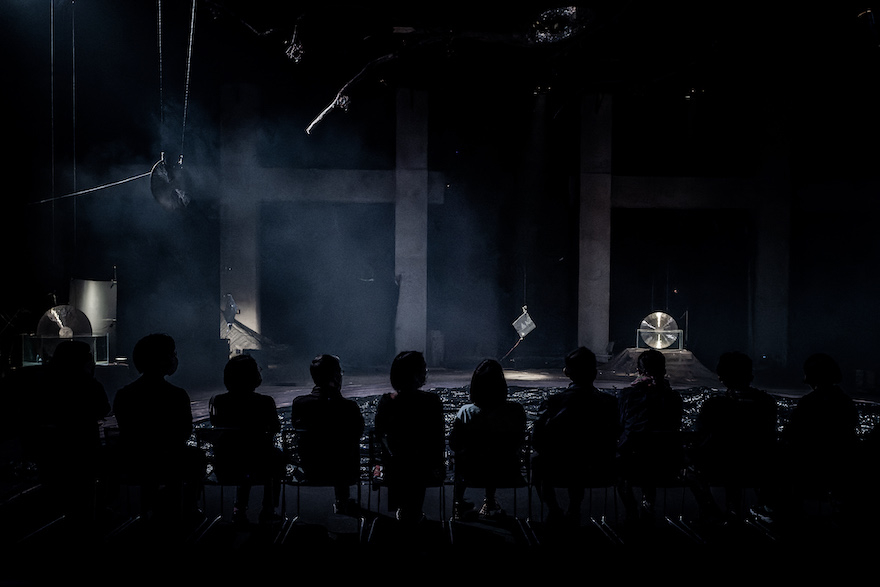 During the performance I wondered several times what would happen if these innumerable sound-making devices were replaced with a recording played through a multichannel speaker system. Theoretically it would have been possible to substitute all the “apparatus,” including the sound already being reproduced from twenty speakers, with audio replayed through speakers. Obviously, the acoustic difference between these would not necessarily be unidentifiable in a “blindfold test.” But what was clear to the audience, was the positioning around them of countless pieces of strange sound apparatus. It was precisely the aforementioned “acousmatic situation” in which though one can directly sense sound as an event – courtesy of the aforementioned sound apparatus – the sources of that sound are unknown, plus the presence of the unmanned system governing the temporal progression of the performance, that were the essential elements irreplaceable with a multichannel speaker system. And it was this set-up that produced the “spectral” time and space one might call the “transitional air” that distinguishes this work. Even someone like me, not personally acquainted with the creator, could genuinely feel the projection of, or actually, the longing for, “my father who died suddenly, and a time and space with my father in it” that he writes of in his commentary. So the idea that “GEIST” was conceived as a place where “a ghost would appear,” my “mechanical haunted house,” was indeed on the mark. 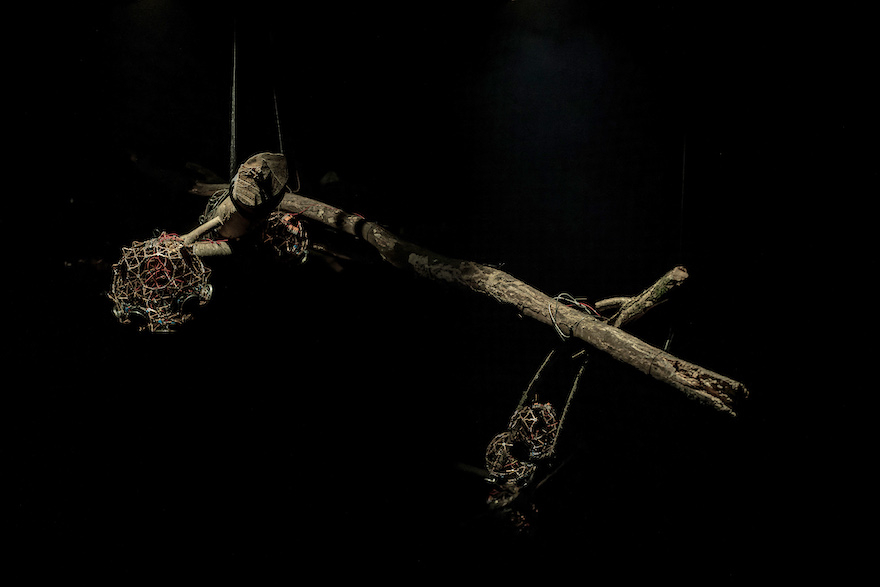 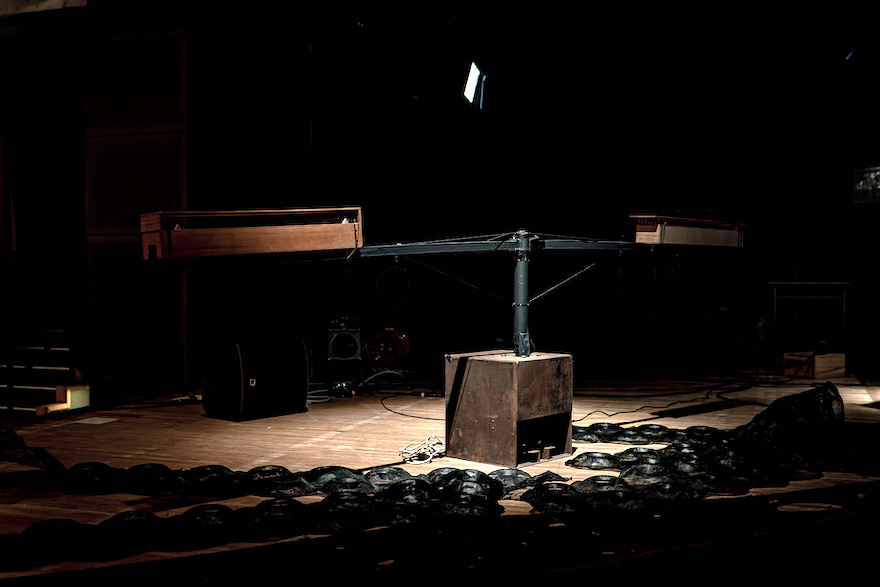 During the ongoing coronavirus pandemic, the possibilities for different kinds of expression using audiovisual devices (media technologies) have continued to blossom and penetrate every corner of the globe. Meanwhile, we may wonder, will traditional performing arts like dance, drama and music remain the core of artistic expression in the real time and space we live and breathe, or could some fundamentally new form of expression arise?
This was the big question I took away from this performance. Incidentally, the event I have been referring to here as a performance is officially known as a “public experiment” of the “FY2021 Theater Experiment I GEIST – Development of automatic musical instruments, input-output devices, and compositional/performance methods, with a view to creating a ‘multidimensional acoustic space'” project. This being the case, surely there ought to be some evaluation of exactly what kind of “experiment” this was, and what made it a success or a failure. In any case, while I appreciate works of music, I don’t scrutinize them scientifically, so the use of the word “experiment” remained a riddle to me. 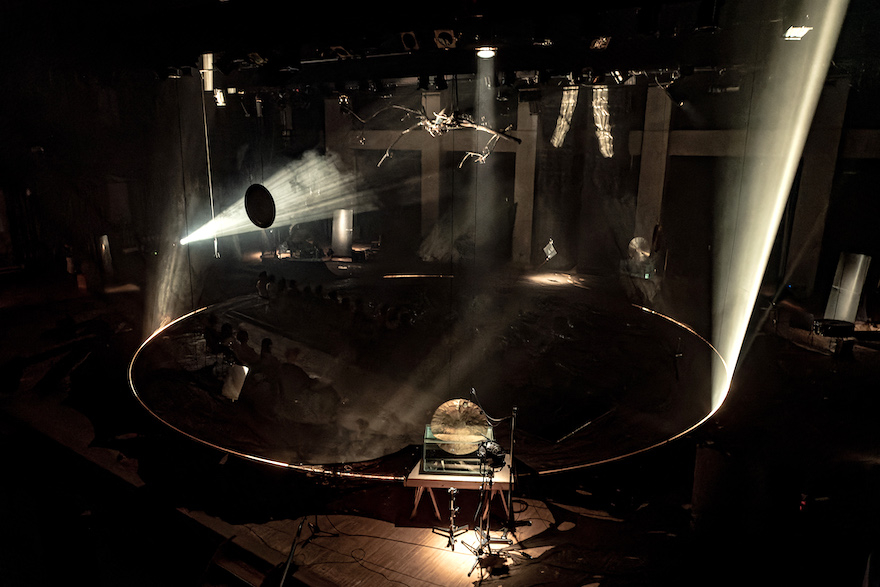 If I may expand on my thoughts around this, I confess I was more than a little surprised that this “performance” was advertised as above as if it were a final presentation for some engineering project, but ultimately I suppose the phrasing of this title was aimed at scoring funding for the project, and certainly not chosen for the purpose of having an audience share some work by the name of “GEIST.”
Though few seem to have pointed this out, in recent years every activity undertaken at a university has become “research,” as opposed to “scholarship” or “learning.” “Scholarship” sought “truth,” but “research” is governed by set objectives, and invariably demands practical “results.” On the other hand, if this demand can be met, anything in the world not previously a topic of academic study, including entertainment, can conceivably be a “research” subject. The problem is, the inherent condition here: “if you want funding, explain what use this will be (the goal)” is essentially incompatible with projects associated with the humanities, including the creation of art. In fact I would say it is the arts and humanities, as distinct from entertainment, that relativize and criticize this very simplistic “measure” of this world dominated by such goals and means.
In that sense, while acknowledging the success of this project in offering a highly accomplished potential form of real-time future expression, it struck me that the framework of “defining as research” the further possibilities beyond mere performance of the work “GEIST” was pushing things somehow. Or perhaps I should say that I was prompted to reconsider the concept of “research” in academia.
Miwa Masahiro
Composer, media artist / Professor, Institute of Advanced Media Arts and Sciences (IAMAS)
https://www.iamas.ac.jp/faculty/masahiro_miwa/ ※*”GEIST – Development of automatic musical instruments, input-output devices, and compositional/performance methods, with a view to creating a ‘multidimensional acoustic space'” was staged a total of four times on March 16–17, 2022 at the Kyoto Art Theater Shunjuza. This review was based on the show at 15:00 on Wednesday the March 16.