The Cité internationale des arts is an artist-in-residence program open to a wide range of creatives that has been operating since 1965 in the Marais district of Paris. I arrived here on October 9, 2021 with the intention of staying for three months with the support of the Chishima Foundation for Creative Osaka, the Kyoto Art Center, Villa Kujoyama and the Institut français du Japon.

The project I am working on involves playing “Chinese whispers” using phrases from Symphonie fantastique by the French composer Hector Berlioz (1803-1869).
As of November 2021, Covid-related restrictions have been considerably relaxed in Paris and exchanges both with others in the Cité and with people outside are again taking place. Social gatherings among artists hosted by the Cité, which had been suspended for several months, are being held, and an opening tour at the Palais de Tokyo aimed at artists invited by the Institut français is being planned.

On 10 November I staged an open studio at Café des arts, one of the shared spaces at the Cité. It is a multi-purpose facility that can be used on a reservation basis.

This was only around a month after my residency began, but in order to attract participants and ensure my project could move forward smoothly, I was working on preparing this shortly after arriving in Paris. The open studio lasted around three hours and provided an opportunity for relaxed exchanges with a wide range of participants. A total of around fifty people attended, including members of the public as well as other resident artists. 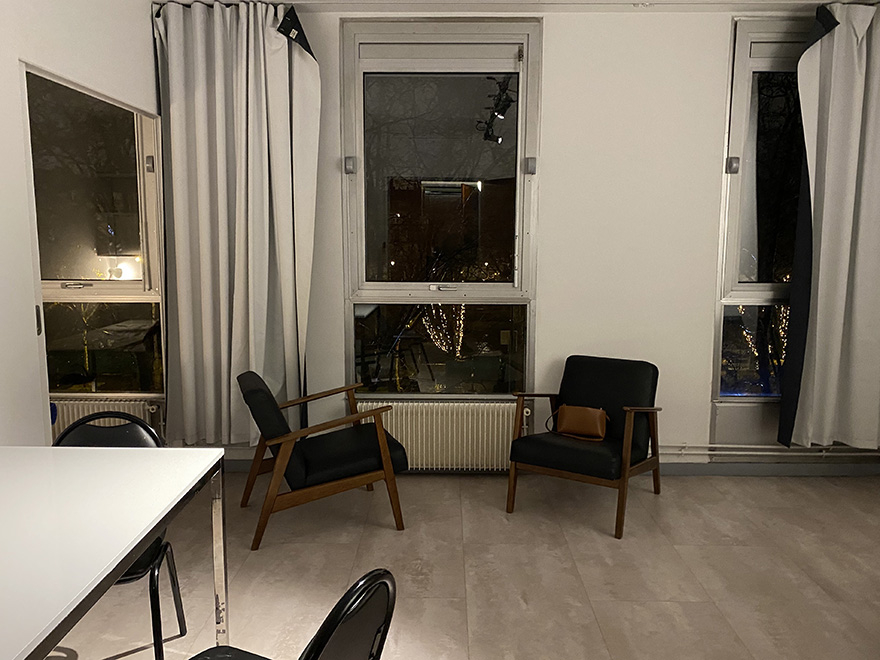 View of the inside Cité des Arts studio that actually stayed. Photo by Kajihara Mizuki

Before reporting on the open studio, I would like to explain once again why I wanted to take part in this artist-in-residence program in Paris, France.

Firstly, there was the straightforward motive of wanting to directly experience while staying here the history of the city where not only Berlioz but many other musicians such as Franz Liszt, Frederic Chopin and Eric Satie lived.
Many of the works I make have as their subject matter the history of Western classical music or the symbolic nature of its scores. The term “classical music” is an extremely broad, abstract definition, but my interest is in learning about the lives of the various composers who were active from around the 9th century when the Gregorian chants first began to be recorded as musical scores to around the 19th century, and in thinking about their historical background, including why, in what circumstances and for what purposes they composed music.

Because my practice is based on the things I learn from this and related questions, one could say it is not so much an exploration of music or sound itself, but an attempt to translate the format of music into other languages. In other words, it is an experiment that involves interpreting in my own way the role played by music and experiencing it in a completely different context.

View from the hill of La Côte-Saint-Tendre in Berlioz’s hometown of Isère, looking towards the ‘Majestic Peaks of the Alps’.
Photo by Kajihara Mizuki

Titled “The Return to Life or…,” the project was inspired by Berlioz’s Lélio, or the Return to Life. This piece was first performed in 1832 as a sequel to Symphonie fantastique, which Berlioz composed in 1830. On the instructions of Berlioz, the two works are to be performed in succession.

Symphonie fantastique was inspired by Berlioz’s doomed love affair with the actress Harriet Smithson. Berlioz was awarded the Prix de Rome in 1830 and went to study in Italy late the same year, by which time he had already decided to marry another women, the pianist Marie Moke.

However, this affair, too, suddenly collapsed during Berlioz’s stay in Italy. Lélio came about as a result of these experiences in Italy, and like Symphonie fantastique, the subject of the story is the composer’s own personal disappointment in love.

The melody signifying “the beloved woman” that can be heard in Symphonie fantastique is aimed at Harriet Smithson, but the exact same melody also appears in Lélio. Of course, it is not unusual for a composer to reuse the same melody in another work. However, to the extent the composer himself attached particular meaning to this melody, which is to say it relies on the technique of “idée fixe” (fixed idea), both works have the same characteristics.

The technique of “idée fixe” established by Berlioz in Symphonie fantastique entails “conditionally linking particular subjects and melodies.” When Symphonie fantastique was first performed, a program containing a love story the composer himself had written was handed out to the audience. In other words, the audience was requested to receive the work in state in which the way they listened to it and the images they associated with it were specified. At the time, this was a rather unusual approach. 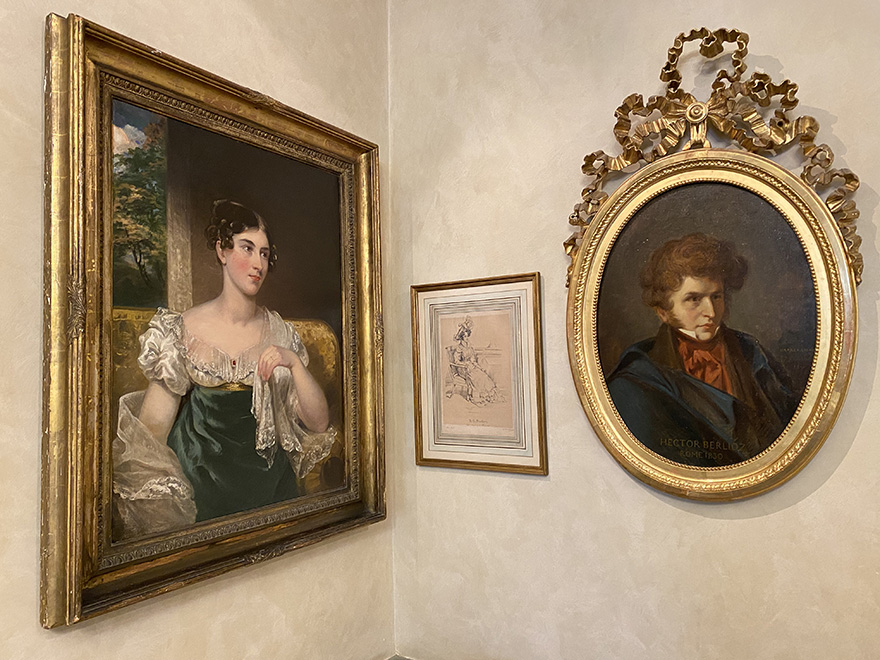 However, the sequel, Lélio, has a considerably more unconventional, bolder structure. The “relationship between narrative and music” that had been explored in the previous work is delved into more deeply and developed experimentally.
At the beginning of this “piece,” a lone narrator delivers a monologue in the form of a love story during which no instruments appear. When this finishes, the sound of a piano can be heard and a solo by a tenor commences. As the work progresses with vocal solos and instrumental performances repeating, the orchestra at last appears and begins playing the same “beloved woman” melody as in Symphonie fantastique.

Accordingly, one could say that Lélio is a work that is extremely difficult to categorize in that it combines elements of opera, in which lines are continually developed as music, and theatrical elements, in which the story is presented through lines alone.

In Symphonie fantastique and Lélio, Berlioz incorporated the element of a “story” as something that could be told in words and express feelings and emotions more concretely. Despite the fact that “stories told in words” and “music” rely on separate sets of rules, the images associated with each are in a sense “forcibly” linked by the composer’s explanation.

In a review of Symphonie fantastique, the German composer Robert Schumann (1810-1856), a contemporary of Berlioz’s, wrote that because he, like most of the audience, had seen the story before listening to the music, he “couldn’t say anything” about its fidelity. And while pointing out that the prepared story took his imagination away from the music, he also added that as he listened to the music his concerns were gradually dispelled.

The project I am tackling in Paris does not touch upon the extent to which music can express content indicated by words or vice versa. Nor does it question the merits or demerits of “program music,” the kind of music originating in Symphonie fantastique in which melodies are given specific themes or meaning, or of “absolute music,” which has no subject and pursues the structure of pure sound.
How does the information that is music spread? I want to tear apart from meaning the music that has been attached to it and reduce that music to personal experience.

I arrived in Paris on 9 October for what would be my first experience of a long-term stay in Europe. In all parts of my daily life there have been situations in which I sense cultural differences with Japan, but above all there has also been bewilderment at the circumstances of a global pandemic. However, even in these difficult conditions, I am greatly spurred on by the energy of those around me who continually want to connect with others and by the emphasis on “conversing through artworks” as opposed to simply “presenting artworks.” At the weekly open studios, too, I encountered many initiatives centered on communication, including those with discussion or study group formats and a project based on plant research in which participants were treated to cookies derived from this research.

Likewise at my open studio, rather than presenting physical artworks I adopted a workshop-like format. Played around a table, the games of “Chinese whispers” were simple affairs in which the first person sang a melody to the second person, who that sang it to the third person, and so on. “Chinese whispers,” called “téléphone arabe” in French, is a popular game, so almost all of the participants quickly understood the rules.

People laughed as the melody kept changing, and this attracted the attention of passers-by who then came in to have a look, meaning there was a constant flow of people over the course of the three hours. People came in carrying drinks, and interacted through music not only with me, the artist, but also with other participants who just happened to be present. This gave rise to a multifaceted meeting place, structured not as participants and artist, where artists representing different nationalities and genres interacted with each other. 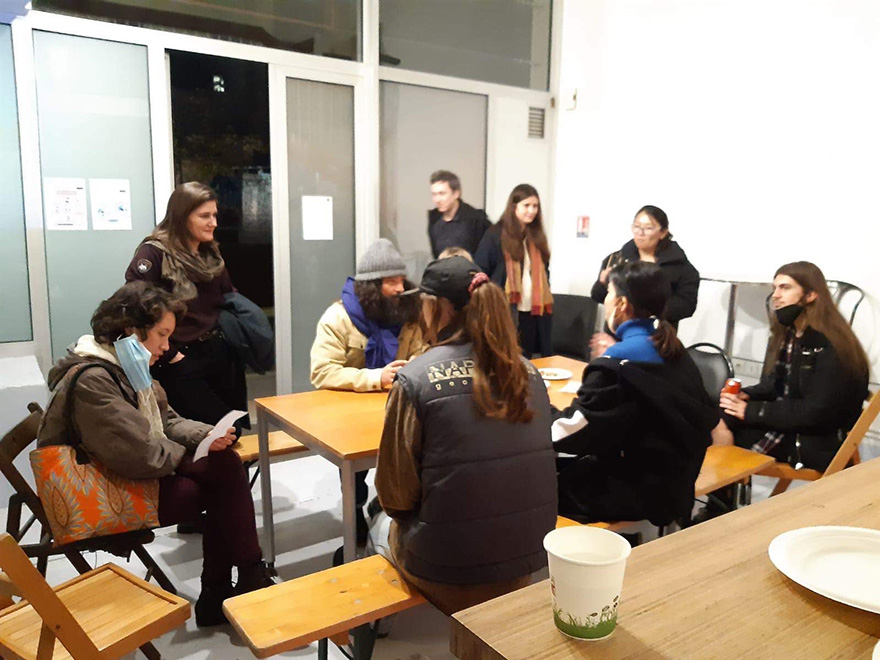 The results of the “Chinese whispers” games were something even I could not predict, but I was interested to see what kind of experience each melody could become in the course of being transmitted via each participant. I thought it might become a melody for that person only, or a melody connected to that person only.
In my next and final article, I will report back on the exhibition held at the conclusion of my residency while looking at the results of playing “Chinese whispers.”

I would like to close with a quote from the above-mentioned composer, Robert Schumann. His words by no means apply to music alone, but rather they touch on individual consciousness and the primitive aspect of the act of “communicating.”

“Melody is the battle-cry of amateurs, and certainly music without melody is nothing. Understand, however, what these persons mean by it: a simple, flowing and pleasing rhythmical tune; this is enough to satisfy them. There are, however, others of a different sort, and whenever you open Bach, Mozart, Beethoven, or any real master, their melodies meet you in a thousand different shapes.
If, while at the piano, you attempt to form little melodies, that is very well; but if they come into your mind of themselves, when you are not practicing, you may be still more pleased; for the internal organ of music is then roused in you.”

To My Paris Residency Part 1 – How will “the beloved woman” change?